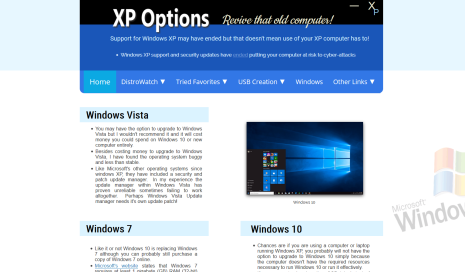 If you have or haven’t heard about the website XP Options this posting is for you.  The XP Options website seeks to provide some helpful tips for all computer users of older Windows distributions but especially targets users left in the cold by a defunct security vulnerable operating system known as Windows XP   Since Microsoft stopped issuing security updates for it, it is highly recommend that users of that OS move on to something more secure.    XP Options is a small bridge to help you with that.

I also want to introduce and recommend a new distribution of Linux for older computers (and new) called MakuluLinux 10 Aero Edition.   The operating system emulates the look and feel of Windows XP, Vista, Windows 7 or Windows 10 using built-in themes.   The core of the OS is Linux and it includes some great word processing software (WPS Office Suite) along with lots of pre-installed nuggets for helping one get online and to be overall productive.   The Opera web browser is included with this distribution while Firefox and Chrome browsers can be added from the included software center.  So if you haven’t already, MakuluLinux 10 Aero is definitely worth a look!

Note about installation: I had trouble getting this distribution to run on a 32-bit laptop computer (with only 1gig of ram) but any desktop PC computer with at least 2 gigs is recommended 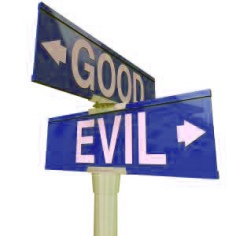 It needs to be pointed out that not all people who call themselves Muslim in actuality are.  And likewise not all people who say they are Christian are actually followers of Jesus.  Of course, this would be true in all belief systems.  In light of this knowledge, I believe it would be fair to say that a true Muslim is one who first and foremost follows Muhammad (which includes his actions and beliefs) and also follow the basic tenets of the Islamic religion.     And this is why the graphic below is so frightening to me and should be frightening to all non-Muslims (Kafirs). 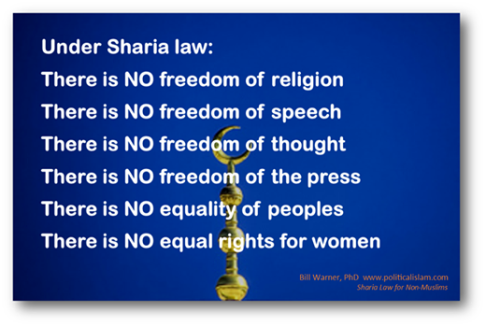 So why are there are so many people not standing up against this evil that is being perpetrated against humanity?   I believe the answer is simple.  It is because they don’t believe that what is being done is evil (they hate the God of the Bible too) and therefore have become part of the problem.  And some people may not believe that it’s evil enough to care.  While others are ignorant of the facts about what Muhammad did and what his current followers do to non-Muslims.   Still others are just afraid to say what they believe.  We shouldn’t be afraid.  We must stand against evil and sin (breaking God’s commands).

“The fear of the LORD is to hate evil; Pride and arrogance and the evil way And the perverse mouth I hate.”  Proverbs 8:13

Whatever category we fall under, the Bible predicts terrible times ahead.   I hope you are ready before it’s too late and will escape the wrath to come.   Hope has come into the world and His name is Jesus.  www.areyougood.us

“It is appointed for men to die once, but after this the judgment” Hebrews 9:27

Grim Reality of the Last Days

Noah and the Last Days movie

If the Los Angeles Dodgers were to start the baseball season with the team we see today, I believe they would not even make it to the playoffs this time.   Right now I believe the team is mediocre at best–much like the past few years.

First, the team has lost their second best starting pitcher Zach Greinke and have not added any replacements worth mentioning.   The bullpen has not been fixed, which has been leaking for a few years now.  Adding two or three great pitchers to the bullpen would go a long way to helping the team stop those leaks when the game is on the line.   If they expect to have a chance at the World Series they must at least add two more strong starting pitchers and trade Alex Wood.  Brett Anderson should only be used in an emergency or a 10 plus inning game.

The offense hasn’t changed in terms of adding great hitters.  In my opinion re-signing Chase Utley was a wasted resigning which will only return similar mediocre results seen from the 2015 season.  Without great pitching, both starting and from the bullpen, and without great hitters throughout the lineup, the Dodgers can only expect the same sorry outcome we have seen from the last three years.

Come spring training and the start of the 2016 season, I do hope the front office cares about truly fixing the team to better than championship caliber.   The holes are real and the holes are big.  Time will tell if they fill the holes and build a better team or if their fat paychecks hinder them from caring about the fans.

Good Intentions and a Long Name

I’m pretty sure when the fine people in my hometown county of Humboldt decided to give the largest airport in the county a new name they did have the best of intentions.  I think.  For decades, the airport has been called Eureka/Arcata airport or Arcata airport even though it’s not really located in either place but rather in nearby McKinleyville, California.   Like most of us who call this county home, we all should be awestruck by and not forget the visual wonders of God’s creation that can be seen here.   We do have an ocean, lots of trees, mountains and green or brown hills depending on the season.  And like most of us who live here or have ever visited, we realize the folks who chose the new airport name probably wanted visitors (and visitors to be) to know that our airport now called California Redwood Coast Humboldt County Airport, is not just any airport in California.  To land at this airport is to land at a different yet special kind of place.  Let me explain.

To begin with,  with such a long name I think the creators of it wanted you the traveler to know your precise location and to have the chance to make a memory at this place–even if you don’t necessarily remember the name of the airport.

Besides knowing ones precise location from the name alone, one can glean even more from its detailed length.   By being in the state of California (which BTW also happens to be a long drive from here to SoCal so maybe flying is a better way) they wanted you to know that once at the airport you will also be among the Redwoods.  Yes, these are those super tall trees you may have heard about in your favorite travel magazine or TV documentary!   And not only will you be near the Redwoods but those same Redwoods are the ones that occupy the west coast in California.   And should you land at The California Redwood Coast Humboldt County Airport would also mean you’d be on the same Redwood California coast as those Redwoods!    I don’t think any of us truly grasp the magnitude of what this means.

Let me try to explain further.  Once your plane lands on the newly conditioned asphalt runway at California Redwood Coast Humboldt County Airport you will not only have landed on the Northern California Coast but near a cliff that is a drop away from the Pacific ocean!  And if this weren’t enough to wet one’s traveling spirit to see and hear all that this place provides,  remember you will also be stepping foot in the county known as Humboldt (yes, that Humboldt).   This is that Humboldt which is located in California on the coast by the ocean with the really tall trees called Redwood trees!  (Yes there are lots of them)

It can be amazing here but I do have a minor suggestion if you are traveling from this airport to see the trees or the ocean or even the coast.   Try to overlook any unpleasant distractions or smells one may encounter on the way….   But I digress.

However, what probably amazes me most about my home county airport is not simply its amazing location of that being near a cliff on a coast with the Redwoods by the ocean in California but of the sheer length of the airport name and tongue twisting characteristics.

(Note: For those who are interested, the name is not the only thing that has been lengthened.  The runway now sits at a length of 6046ft!  Now let’s see those big jet airlines!)

Having a long runway is good, but I still wonder about the long name?  What good is a really great name if it is hard to remember or even say?  This is maybe where the name falls short, or long depending how you perceive it.   Ultimately of course tourists will get to decide as the airport’s new name becomes more widely known. (along with this post)

For now I think I’ll just call my county airport the Humboldt County Regional Airport or maybe a better fit should be:  The Airport With a Long Name (That’s Kind of Hard to Remember and Say), unless you’d rather keep saying California Redwood Coast Humboldt County Airport over and over until it rolls off your tongue like water on your cat’s back.

Either way, welcome to Humboldt!

You may have heard the saying “Follow the money”.   When seeking the source of terror or criminal activity one usually can follow the money and find the answer.   But how about when the terror is based on a belief system?

Despite government authorities statements they were still seeking a motive related to the San Bernardino massacre,  I suggest we can know the motive of the Muslim murderers, not only San Bernardino CA but Paris, New York, the middle-east and elsewhere.   We can know the motive if only we are able to look at history and ideologies.   The answers are right before our eyes yet it seems many in government and law enforcement including the FBI (at least publicly) choose to close their eyes and instead invent motives and causes that remain politically correct.

The greatest way to know how one is to act within a particular belief is to follow the leader of the belief system.   As example, in Christianity Jesus is the one we are to follow.  Although it’s true that Jesus is more than a “great leader” because He is God–He is the perfect example of what it means to be a Christian.    Therefore, all one needs to do to know about Islam is to see how their leader acted.  In this case the leader is Muhammad.

Motive for the beheadings, mass murder and massacres we see by Muslims committed around the world is simply done because of what Muhammad already did.  He believed in the annihilation and subjugation of societies.   Don’t believe me, watch the video below.

Find out more about this here.

Despite the tragic events that continue happening around the world: There is Hope