What is Cities Skylines?

Cities Skylines is a city builder game similar in-game play to the popular SimCity building series.  After having time to play Cities Skylines I wanted to share some aspects of the game that I have found disappointing and discuss some issues I have yet to find discussed elsewhere online.   Of course there are great things to like about the game and I do.

A note about outside reviews and opinions of the game

Even though Cities Skylines is over a year old now it seems like a great game to play based on YouTube videos and online reviews.  And all the reviews and opinions I have found online about Cities Skylines paint the game in a purely positive light while many criticize SimCity 2013 (aka SimCity 5) mostly for its once needed persistent online connection.      It is important to note up front I have do not have much experience playing the latest SimCity 5 (aside from a free 2 hour trial) but have purchased Cities Skylines and have played it many hours.  (Read my updated SimCity 5 experience here)  My comments will be made mostly about the gameplay of Cities Skylines based on personal experience and opinion.

First, I will start by saying I have quite enjoyed Cities Skylines and believe it to be well worth what it costs (around $30) for the base or vanilla version of the game.   However,  it is also important to note I am using a graphics card below the game’s recommended specs so my comments will be strictly content related in nature rather than performance based.   (Additional note:  despite using a gpu and older computer below the recommended game specs I have gotten surprisingly decent game playing experiences along with a few crashes due to modding.)

Now as I have already mentioned, the game is worth buying for its price but user-created content and mods make it even better.    My problems with Cities Skylines come from the fact it is a European based game and it shows.   Being an American and living in the United States there are game oddities in the vanilla version of the game that have been somewhat hard to overcome without a mod.  In fact, the Cities Skylines I play today includes quite a bit of user-created content such as Mods and Assets that vastly improve the game where it is lacking mechanically or visually or both.

However, if one is looking for the game to be American in style without mods it can be lacking.   Even when searching for user-created content to Americanize the game, I have found styles and content to be overwhelming foreign or European based.   Don’t get me wrong I have found some American style created content such as American Roads or American sirens for emergency vehicles and even American style buildings, trains, planes, and other vehicles–but just a few.  Although the European based styles are ok as options I would love to see more American variety besides New York City.     What about rural Humboldt California, USA? 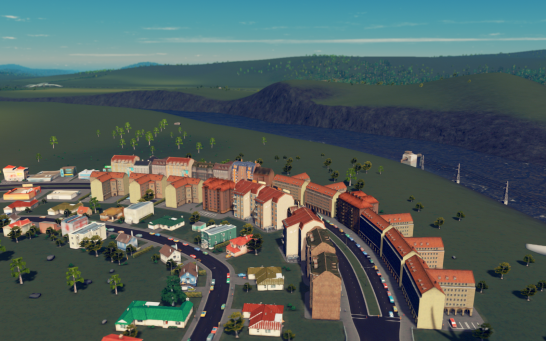 As already mentioned,  the vanilla game in my opinion is not very visually American (besides the default option of having vehicles driving on the right-side of streets) but the default building styles are no different.  The included European looking buildings appear old and outdated lacking color and I didn’t much American style included without adding some user-created content found on Steam.

I don’t believe overhead electric cables are the norm for many American rail systems across this great country unless we’re talking about a tram, cable or light rail system.   The rail system in the heartland is open track (without overhead electrical lines) with diesel-powered locomotives rolling on them such as BNSF, Southern Pacific or Amtrak.

The include trucks, buses and other included vehicles overall also have a distinct European look many of us in the United States will find foreign looking.   However, this foreign “look” can be somewhat remedied (like the overhead cabled train tracks) by adding some user-created American style vehicle assets which have been a welcome addition to my game experience.     But keep an eye open for me as I am still looking for an American semi-truck trailer without 3 wheels on the back axle!

If you are seeking realism in a city builder Cities Skylines has some.   I say some because it’s a game.   Now I don’t expect the game to be real to life in every possible way imaginable because after all it’s a simulation and it’s suppose to be fun.    Yet, I do think some mechanics tweaks could be achieved to make it a little more fun.  For me, one in particular is the simulation speed when the game is running at its lowest setting.

To clarify, by speed I am not referring to performance or frame-rate but the simulation game-play speed.   The vanilla game includes three simulation speed modes, slow, medium and fast.  This is the rate at which the cars and people move on the street and buildings are erected within the simulation.   Having a high-speed is a great option when you want buildings to grow fast or simulation time increased to build the city’s income.   However, in my opinion the slowest speed is still too fast.  Cars and people buzz around as if they have been put on fast forward and are little bees buzzing about on speed juice.   At times, it can be almost hard to watch when I just want things to slow down to a more realistic pace.    Yes, once again there is a mod for this.  Introducing a slow game mod to the vanilla game does wonders for more realism.   My question is, why didn’t the game creators include a slower mode with the base (vanilla) game?

Even with my minor frustrations for Cities Skylines vanilla not being more American looking by default, or an overly speedy simulation even on slow,   I do think Cities Skylines is an excellent city building game worth purchasing–even if you live in the United States.    The game is fun to play and challenging especially with mods and other user-created content.    In fact, I think finding great user-created buildings, models and mods is all part of the fun.       So if you are still on the fence about whether to purchase Cities Skylines and you have a computer with at least 8 gigs of ram and 1 gig  included on the graphics card (GPU) (recommended 16 gigs ram and 2 gigs graphics) then I think Cities Skylines is a great buy.      See full specs on this game here

Read about my updated SimCity (2013) (aka SimCity 5) experience here.

This is a post about an article found on the Blaze by Carly Hoilman.  The truth and sadness of abortion must be made known.  Therefore I have decided articles like this must be posted and re-posted because the mainstream media will generally ignore stories that expose abortion for the ugliness that it is.

21-Year-Old Woman Hangs Herself Months After Having an Abortion, Leaves Collection of Chilling Notes

Judgment is real but there is real Hope